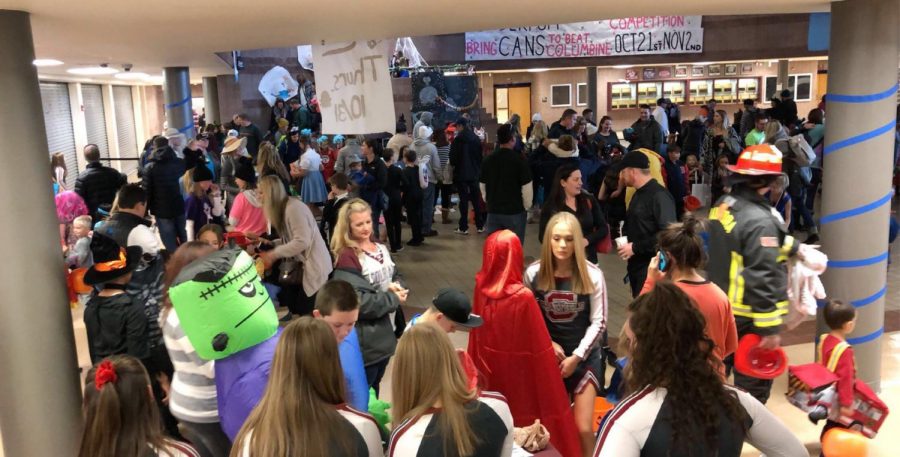 Halloween is undoubtedly one of the most popular holidays of the year. Children everywhere make it their mission to get the most candy they can, competing with friends and even siblings. To ensure that the children get safe candy, Chatfield’s Trick-Or-Treat Street (TOTS) event had lots of tricks, lots of treats, and obviously a bunch of candy.

Several clubs participated in TOTS, decorating their room to be various different themes.

Multicultural Alliance (MCA) turned the entire entrance into into Legoland, hanging huge Lego pieces and placing statue-sized Lego people over and around the bridge. The effort from everyone really did pay off.

Drama Club opened with its theme of Alice in Wonderland, filling the room with colorful and wacky decorations. It even led over in to the theatre, which was set up to look like the Red Queen’s castle.

Alliance recreated Monster’s Inc., setting up mini-games for all of the kids to play before getting their share of the candy. Seeing the movie play itself on the screen while entering really pulled the theme together for the kids. And Choir, who themed their room as Pirates of the Caribbean, even dressed themselves up from head to toe as pirates.

The Family, Career and Community Leaders of America Club (FCCLA) transformed their area of A Hall into everything Moana, putting flowers and waves everywhere. DECA and FBLA did Glow in the Dark, making the room feel both fun and spooky at the same time.

National Art Honor Society (NAHS) turned their room into Candy Land, Science National Honor Society (SNHS) made some spooky science experiments, KEY Club was out of this world with Animals in Space, German Club danced the night away with Disco, and last but not least, National English Honor Society (NEHS) made a pumpkin patch.

Overall, the night was a real success. It was a lot of fun to see all of the kids come and dress up and get safe candy. All the clubs did a great job, so they deserve their own round of applause. Nice work everyone!