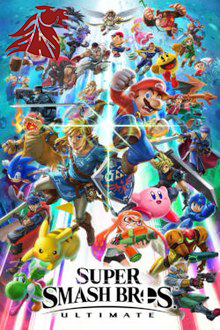 Just the box art for SSBU, with the Charger logo in the corner.

Having happened on the thirteenth of November, the second official Super Smash Brothers Ultimate tournament was an exciting event with a multitude of attending people – at least thirty players entered the tournament itself, and a stream of spectators gradually entered as the game went on. Hosted in E204 by Ms. McManus and Mr. Alonzo, the tournament was hosted around the room with a total of four Nintendo Switches, strategically placed for better focus and efficiency.

The first round of the tournament featured a few exciting fights, and they only got better as the hours passed. Being the longest round due to the high influx of players at once, the round went on for quite some time – rounds could be fewer than five minutes or even longer than eight. Having learned from the last tournament, the tournament makers from the Gaming Club were quickly able to adjust, and used the rules from the tournament in Evo 2019 to make up the difference. Quite thankfully for the players, all of the downloadable content characters (including Piranha Plant from the Super Mario Bros. series, Joker from Persona 5, Hero from the Dragon Quest series, Banjo & Kazooie from the Banjo & Kazooie series, and Terry from the Fatal Fury series) were included in the tournament consoles, and no characters were banned from the competition. This latter lack of a rule might’ve had some influence on the tournament, as the fight for third place had two Ganondorfs (the primary villain of The Legend of Zelda series) brawling on the Kalos Pokémon League stage (taken from Pokémon X and Y).

Moving onto the second round, the fights got briefer as the skilled players began knocking each other into oblivion within minutes. In fact, perhaps the only thing that kept the tournament going for as long as it did wasn’t the fights but the in-between times of the stations. Either way, the second round had a far less casual air to it, as both spectator and player alike focused intently on every possible match.

The fights in the third round were even more tense than any prior, with the chances higher than ever that a not-so-friendly rivalry of friends would emerge. More players left in defeat, with the true goal of the tournament finally within reach.

The fourth round was the semifinals. The individual fights were rather close, and the damage stayed even throughout. That is, until the scoreboard for each fight reached 2-0, and the deed was done. By this point, the two losers weren’t of any lesser spirits, and chose to compete with each other for the $10 third-place prize. The first of these fights was the aforementioned Ganondorf vs. Ganondorf. Due to the heavy-hitting nature of the character, the battle was over within moments, and the second match was soon to come. One of the players remained with his trusty fighter, while the other swapped over to Link (the hero of The Legend of Zelda series). Brief but just as intense, the fight ended with the villain triumphing over the hero, and the scoreboard hit 1-1. In the final of these matches, the primary user of Ganondorf throughout the tournament pulled out his victory card – the dangerous, the ferocious, the pink puffball, whose name is Jigglypuff (singer of lullabies from the Pokémon series). Player two resorted back to Ganondorf, and the final match for third place had begun. The stakes were high, and both contenders were knocked away, down to their last stock (or life, for those unaware of Super Smash Bros. terminology). In all the chaos, player one was defeated by his own character throughout the tournament. The battle for third place was done, and player two had won.

With third place out of the way, only two contenders remained. To up the ante, the match was set to victor of three out of five wins, rather than two out of three. Player one began with his primary character Pikachu (mascot of the Pokémon series), while player two selected Donkey Kong (primary character of the Donkey Kong Country series). The first round started off fairly even, but quickly shifted in favor of player two, before balancing out and resulting in player two’s victory. Round two was very much the same, and player two only required a single victory for first prize. In an effort to stave off a loss, player one went back to his setup and chose Ness (protagonist of EarthBound, also know as Mother 2). The surprising character change turned out to be in vain, as round three was over quickly and with little problem for player two. With that conclusion, player two won first place and a prize of $30.

By the time the last victory was had, the clock had hit 5:20 p.m. While the initial planning stages took a chunk out of that total time, future contestants should be aware that this was by no means a fluke – the first tournament took the same amount of time. So, what was an overall takeaway from the event? The first takeaway here would be that more tournaments will be held, certainly of Super Smash Bros. Ultimate, but quite possibly of other games in the future. The second would be that the price of admission may rise, partially to raise the prizes, partially to ensure the entry of higher-level players in the field. A third takeaway would most definitely be the following: gaming has taken on a new personification in the community of Chatfield Senior High.

The following videos are all fights during the tournament, specifically one of the semifinals, the fight for third, and the fight for first. All of the audio is muted for various reasons (including but not limited to expletives and the auditory health of viewers), but the fights themselves are completely unedited aside from that.

This first match is one of the Semifinal matches.

The second match listed is the match that determined third and fourth place.

The third (and final) match listed is the Finals fight.