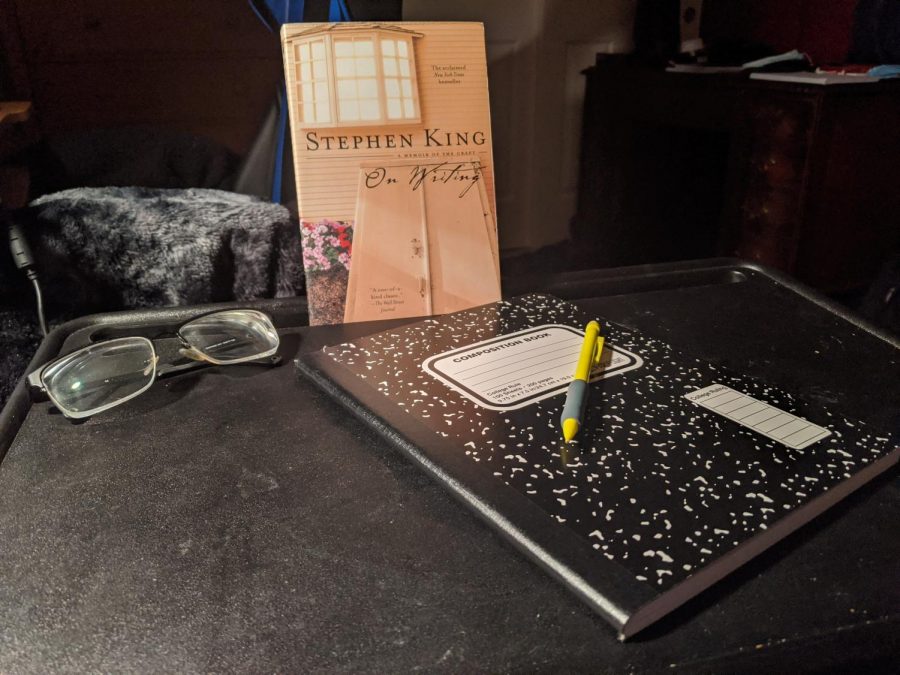 Stephen King's On Writing is highly recommended for everybody.

As some of you may know, I, Jack Thistlewood, write a little bit. I started writing for myself just before quarantine started (coincidentally, I may note) about six months ago. Since then, I’ve done about a thousand pages of writing. I may not be an expert on the subject of writing, but I’d still like to throw into the ring what I love about it so much.

First and foremost, I love the feeling of possibility. I can create whatever I want. Especially for students like myself, the possibility of being able to create something of my own still feels like a foreign concept, at least somewhat. So being able to write whatever I feel like writing, for nobody but myself, feels amazing. And, if I must admit it, the craft of writing is a very serious addiction for me. It may not be illegal, but the euphoria surely parallels those extremes.

Now, I understand that many people are turned away by the concept of writing. English classes have taught most (if not all) of us that writing is some sacred action where one must create themes and motifs and that the text must have a certain meaning. In the end, I have to direct everyone to a simple book – one that a relative of mine (who just so happens to be an English teacher) gifted to me. That book would be Stephen King’s On Writing. If there’s one message I found there, it was that the story comes first. King himself even admits that one of his first big hits, Carrie, only revealed its themes and motifs when he’d finished its first draft.

Getting that major pet peeve about education’s view on reading and writing out of the way, I also wanted to describe more in-depth the process of writing itself. Specifically, what the flow of writing feels like to me.

The first thing I and everybody else needs to know is that not all stories are planned out from beginning to end. In fact, as I have experienced for myself, the original notions of what a story might be are very often averted in favor of the story’s more natural flow – a flow that goes somewhere else entirely. A story instead starts with a question or idea (for example: Lord of the Flies is based around the question of what man does when unchecked by society) that then evolves into the characters and plot.

Having a story fly out of the nest on its own is an incredibly exhilarating feeling for a writer, I swear upon it. When I get into that flow, I can crank out twenty pages or more in a single day. Now, it’s quite rare that I get that into it, but, nonetheless, seeing the words almost fill themselves out on the page is a fantastic prospect.

Then there are the characters. Oh, the characters. A simple image and a name are more than enough to start down that road. Like the story itself, the characters almost seem to gain a life of their own. For the writer, and by extension potential readers, those characters aren’t creations – they’re very real existences.

But I digress. Writing is the medium through which I personally create. I don’t know how it feels to create a work of art, nor do I know how it feels to shoot a movie or make a script for a lengthy series. However, I do have a very strong feeling that any creator of any sort feels the same exhilaration that I do when they perform their craft.

So what does this all mean to you? That some random kid named Jack writes a lot? Perhaps. But there could also be another meaning. An application. I gave myself permission to write for myself. That’s just the way in which I’ve started to create. You? You can create, too. It doesn’t need to be for others, nor does it need to be for yourself. Do what you want to do. Create however you want to create. That’s for you to decide.