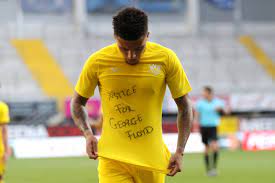 On July 23, 2021 the Tokyo Olympics will start. A lot of the athletes decided they wanted to raise awareness and protest because of BLM and everything that has happened in the last year. The International Olympic Committee (IOC) typically doesn’t allow athletes to protest or wear/say anything political, however, they might change this rule because of the past year’s events.

The IOC has said that they will enforce Rule 50 which forbids “demonstration or political, religious, or racial propaganda”.  It has been said that if athletes take a kneel or raise their fists in protest they will face punishment, however, they are allowed to protest in another way. They cannot say “Black Lives Matter” or anything direct like that but they can write “justice”, “respect”, and “equality” on their shirts. Most athletes support this decision, but the ones that do want to peacefully protest on behalf of fundamental values have support.

Brendan Schwab, the executive director of the World Players Association supports athletes’ free expression. An independent group that represents Germans Athletes, Athleten Deutschland, is also supportive of the athletes that want to protest. They said they oppose the IOC’s decision to punish the athletes that protest. Global Athlete is another group that doesn’t agree with the IOC’s decision to enforce Rule 50. It argues that they value the athletes’ freedom of expression more than the IOC’s rules. Most athletes wont protest during the Olympics, but the ones that plan on protesting need support, and luckily they have that.

Since Rule 50 is in place, there will be punishments if it is broken. However, leaders of two of the largest Olympic bodies, one being the American National Olympic Committee (USOPC), have opposed this and encourage their athletes to speak out about social injustices. Therefore, the USOPC has decided to not punish their players for wearing BLM apparel or raising their fist in protest.

Considering the past year’s events, it’s no surprise that some athletes want to speak out about social injustices. It is important that they have support if they do want to speak out, but they also need to follow the rules set in place. Hopefully, the athletes that don’t want to protest support the ones that do, and the athletes that want to protest do so peacefully. While speaking out about about important topics like BLM is brave and inspiring, it is still a very controversial topic and can cause conflict. It’s important that everything remains peaceful and if athletes follow the rules and support each other, this years Olympics will go just as planned.